How can *THAT* be? Has Google – and cellphone companies – been lying to us? Do SEO gurus not know what they’re talking about? Is all the conventional wisdom wrong? Is this an expected glitch from noon traffic?

Here’s a screenshot from the Google Analytics data for Google’s online store: 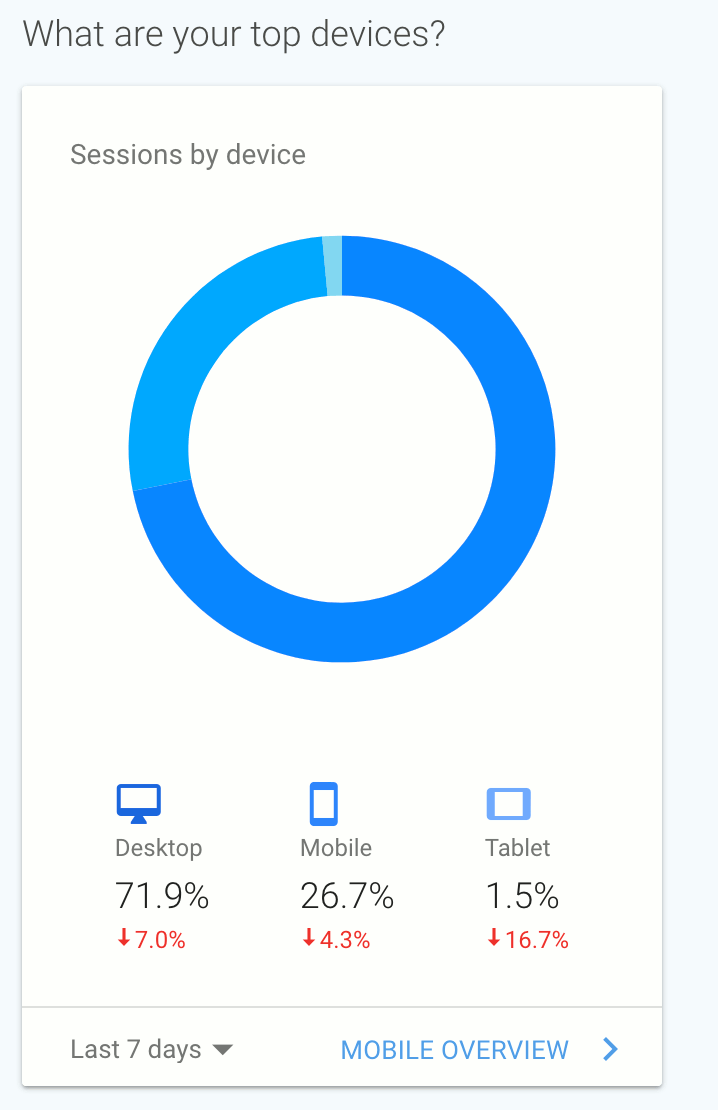 The title SEO “expert” is an immediate red flag of poor source credibility.

The trust level for purchase transactions on a desktop is still higher than mobile. In Africa or The Philippines, you have no choice. Mobile is your only option since you may not afford a table to but a computer on.

Most shopping happens from a company-owned job-related computer. That’s right. Goofing off. Especially during the holiday season. It’s estimated employees goof off 30 percent of the time. You can fake you’re working while shopping and listening to Pandora. Perfect. So is it real shopping? Uh. We don’t think so. Wasting time is not shopping with a purpose. It’s window-shopping from boredom.

OFF-TOPIC: Take for example the statistic that WordPress owns 1/3 of the Internet. Is that real? Or a myth they don’t squelch because it makes them look and feel important? No clue.

We don’t know what to trust in the world of metrics anymore. Google doesn’t disclose how it gets information. It’s secret. They don’t tell us if it’s skewed by something or biased. In a sinister world, it would be completely fabricated.

If their data is so perfect, why do they fix algorithms every month?

Google does more to slow down mobile traffic and page loads than any other culprit on the web. Yet they claim they’re advocates of speed. Smokescreen.

One question is who are the people in the sample? Are they global or domestic? If this is store data, what is the buying behavior of their particular sample? How stale is the sample – real-time? Are they last year’s average? Cyber Monday?

Anyway, a few simple questions would blow some holes in this information.

This much is real – Google spins data to their advantage. Vanity metrics.

Our experience working with clients around the world is “mobile is worrisome.” But not for everybody. For example, 85 percent of our readership is on desktops or laptops

The people who ask us to “fix” their websites have high mobile rates: 70 to 80 percent of mobile traffic. Where do they get that information? Google Analytics! Is Google Analytics a trustworthy source of metrics? Not for a minute. They have improved a few things to remove artificiality. For example, until recently they counted visits from bots as real visitors. That meant an easy error of 10 to 30 percent on some sites.

Last year, they did various adjustments to thwart people generating fake content. The people the hardest hit were selling snake oil. Those were the people approaching us for fixes. All brainwashed that SEO was the most important thing to mess with. They wanted speed for better SEO. Even though we told them that was a falsehood. They still wanted speed for SEO, just in case, we were wrong. Too weird.

We don’t have to brainwash people that speed is important. Google does that for us. Free sponsorship.

So we use Google Analytics to track post popularity. The reason is that it’s faster loading than a “Popular Posts” plugin. Those plugins track metrics inside WordPress using the MySQL database. The way we do it is faster anyway. Last year our traffic was up. Google did some adjustments and the number dropped by 20 percent. We also realized we had a slow tracking beacon on our homepage. That’s our showcase page. That’s the page most skeptics test for speed to see if we walk the talk. Google Analytics slows down pages. So we removed it from the homepage.

We turned off tracking for the homepage with selective activation. The numbers dropped another 10 percent. That was fine since that was before reported as 10 percent of my visitors. But we care less about how many people come to our website front door. We’re not interested in “funnels” and “paths.” We only want to track the popularity of articles. Not our site popularity.

Now with all this jockeying around, did our bundle sales drop? Maybe. They certainly didn’t increase. But we can’t attribute it specifically to lower traffic. It will always be unknown even if we get sucked into the SEO vortex – like many other web fools.

So many unknowns based on half-truths and misdirection.

What we’ve seen as far as web designers go, they still build for desktop first. Not mobile. Why? Have you ever tried to build a website using a phone? Crazy. But people do it. A phone is how many manage online stuff. Not the way we want to do it. We hate looking at tiny screens and trying to push things around with our fingers. We test with mobile devices. We don’t build on them.

Based on our site “data,” designers prefer desktops. And according to Google, 75 percent of our traffic is international. But do we build for mobile-first? Yes. To the extreme. Why? Because that is our positioning strategy. It’s what differentiates us from the herd of wannabee speed experts. That is a fragile position. But it gets us conversations with some interesting people and problems. We then become even more expert. We figure the 25 percent who look at our site on mobile are the same people viewing on desktop. They’re checking our credibility.

Anyway, what makes a difference? We don’t know. We may not even care. It has an opportunity cost checking metrics every day. But content that solves problems (real or imagined) seems to work for us. Do we care what device they’re looking on? No. Because we build for mobile since that is the anxiety and pain for our readers. Real or imagined pain. We may be selling placebos. If it makes users feel better, that is OK with us.

So interesting side note: We’ve had 3 or 4 international bundle sales this year when downloads failed. Why? They were downloading a 3-megabyte bundle on an iPhone! The connection timed out. We ended up supplying those 4 bundles through WeTransfer.com. But that put the kibosh on our idea of self-hosting video from our media library. Can you imagine downloading on a remote phone something as big as a gigabyte? Crazy.

Google can’t measure user experience. Not really. Can they measure happy or sad or disgust? Nope. But they have a lot of people fooled into thinking they *can.* Even if they could see your face, they would still have to guess. Google can’t judge quality of content. They guess.

Google predicts 200 “precision” secondary signals. They make assumptions what those mean. This includes things like:

There is some truth in what they’re doing, but not a lot. Even real-life people judging every website would still be inaccurate – and impossible. All the “signals” are prone to cheating and mismeasuring. It’s ridiculous.

People make a lot of assumptions about what matters and what doesn’t. For example, many think speed is critical.

Sorry. Relative content is much bigger than speed. Anything is bigger than speed. Speed is a pimple on the Google algorithm. Less than a half-percent improvement. Big wow. It’s amazing how many people believe that speed is a huge ranking factor. It’s not, as we’ve said many times.

Doesn’t Google use PageSpeed Insights scores in search ranking? No. That test’s an ivory-tower exercise to drive site creators crazy. WordPress sites can’t pass that test. Not even Google’s homepage passes that test. Try it sometime.

Is speed anxiety serious for e-commerce? Yes. Big anxiety. Why? Google whipped them up in a frothing frenzy. Speed propaganda says fiddling makes a difference. Amazing.

We often open an article in a tab and then proceed to read something in another tab. That dormant open tab counts as dwell-time in Google’s book. Google (supposedly) counts that dwell-time for up to 30 minutes. Is that indicative someone is reading the content? We may never return to read the article – and close the tab.

This fake-out creating false data bothers mighty Google. It’s the motivation for more spying via Chrome browsers to gather data on user behaviors. Every time we use a Google product, we consent to them gathering data.

Google uses artificial intelligence called RankBrain to predict user intent. This means filtered information by an “unbiased” machine before presenting search result choices. We don’t filter anymore. Google does. Interesting. How does that taint the data? Isn’t data then analyzing itself? Too weird.

What’s to prevent Google giving preferential treatment to big advertising clients? They wouldn’t do that, would they? Well, yes. An example: When it came time to roll out the mobile-first page ranking algorithm, did they test on big accounts that brought them profits? No. They quietly excluded them. Instead, they experimented on millions of little sites as no-risk collateral damage. They weren’t about to test on any big fish. Profit first.

Hmm? So Google does game their own system.

Everyone says Facebook and Twitter over-control what people see on the Internet. But they never realize Google is the one who controls most:

Don’t believe everything you read or hear about the relationship of SEO, UX, and mobile speed. Especially if Google said it.

If MailChimp messes up and doesn’t deliver your free report, email us and we’ll kick their monkey butt.