Before you read our post: read this one first offsite: 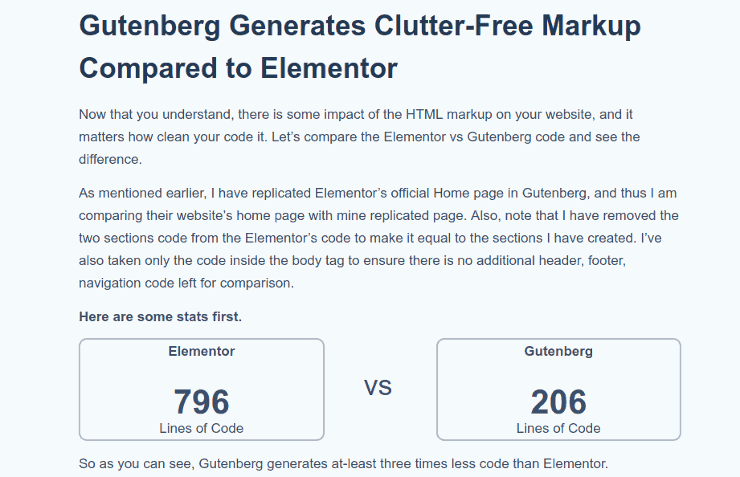 Some say Gutenberg slows down WordPress core from 24 milliseconds to 116 milliseconds. That would mean Gutenberg sucks for speed. How bad? About the same as adding Google Fonts to your site. Is that bad? Well, for extreme speed, we always strip Google Fonts from a theme.

But that reported benchmark is lame. The dust hasn’t settled on Gutenberg enough to learn the real speed badness.

Another guy commented saying, “Gutenberg adds only 30 to 40 milliseconds.”

“However, the overall rendering time for a simple text-only post increased by almost 500%, when Gutenberg was enabled. There is certainly some level of optimization that will occur when Gutenberg is merged to the WordPress core, but in general, it seems like WordPress’s baseline speed may suffer significantly.”

“Even after disabling Gutenberg with the Classic Editor plugin, overall rendering time is still 300% slower than the existing editor.” – Source

But really, it’s impossible to tell how the final phase-3 version will be for speed.

And we loved this comment – of course. Because it bashes on the page-builder temptation-to-bloat syndrome:

“Based on what has happened with pagebuilders like Divi, Beaver Builder, etc., when you give people easy options too many of them choose all the things! They don’t even understand they’re dragging their site down, because it loads fast for them (because of cache – which they also don’t understand).”

So what? Who cares about a silly definition?

Because people label Gutenberg as a pagebuilder – even when it’s not – causes retardation of Elementor adoption. For example:

“Now, four months after my post, Gutenberg has grown up a lot, and it has evolved into a pagebuilder that is being developed at a very rapid pace.” – Source

Hmm? Is the world defining Gutenberg as a pagebuilder? This creates more market confusion.

Still, more eggheads think Gutenberg is a pagebuilder? Is this erroneous thinking affecting Elementor adoption? We think so.

1
“Classic Editor [plugin] restores the previous Edit Post screen and makes it possible to use the WordPress plugins that extend it, add old-style meta boxes, or otherwise depend on the previous editor. Fully replaces the Gutenberg editor and restores the Edit Post template.” – Source

2
“Gutenberg Manager allows you to enable/disable the editor where you want. Why would you want to disable the editor on pages? Maybe you would like to use a pagebuilder like Visual Composer or Elementor instead!” – Source

These guys imply Gutenberg is a pagebuilder alternative, too!

3“When Gutenberg is active, the [Disable Gutenberg] plugin disables it (depending on your selected options). Otherwise, if Gutenberg is not active, the plugin does nothing. So it’s totally fine to install before Gutenberg is added to WP core, so it will be ready when the time comes.” – Source

And what does WordPress say on their Gutenberg plugin description:

“Gutenberg is more than an editor. While the editor is the focus right now, the project will ultimately impact the entire publishing experience including customization (the next focus area).” – Source

Is Gutenberg more than an editor? Is it gonna be a page customizer? Say what?! We thought they said it was only going to be an editor? We get it now. WordPress thinks it’s a page-builder killer. Their written goal is to “create beautiful layouts” – “a foundation for things to come.” But only “90% of plugins” will work with it. That means 5,519 plugins will not work with it. Oh, joy!

“Gutenberg surely is an interesting and ambitious project, but not of any use for 99% of my clients.” – Source

So there are millions of Elementor installs. That’s a lot. Elementor is a popular pagebuilder.

But Elementor growth is slowing down. Why? Gutenberg is damaging (retarding) all pagebuilder adoption. The installation numbers would be even more if Gutenberg were dead or complete.

Reader quote: “I’ve gleaned a lot from reading your site … especially what heavyweight plugins to avoid. You also solidified my intention to avoid Elementor (if I can’t do something with GPP [GeneratePress Premium], I can live without it.) Besides, with Gutenberg coming, I’ll just wait for WP to natively add page building features.”

How do other pagebuilder growth rates compare?

Sorry. WPBakery Page Builder (formerly Visual Composer) and Divi Builder by Elegant Themes are not free. Based on the flurry of emergency promotions, we’d guess they’re in decline, too.

Why? It’s really no guess at all. Gutenberg! Released on the 6th of December 2018.

WordPress (Automattic) will mickey-mouse for years getting Gutenberg to a workable version. Let’s see what happens. The first released version will be 100-percent extreme poor quality. But they’ll promise to fix it – right away (stall tactic). And, yes, we agree. Gutenberg is classic vaporware.

Gutenberg will dominate the market even though it sucks. The Herd will prevail.

Today, we predict pagebuilder plugins will die before the end of 2020.

Gutenberg is another example of retarding market growth with technophobia. Technophobia includes the fear of obsolescence. Wasted time and money by the user adopting the wrong thing too soon.

The best pagebuilder isn’t invented yet.

“Gutenberg has three planned stages. The first, aimed for inclusion in WordPress 5.0, focuses on the post editing experience and the implementation of blocks. This initial phase focuses on a content-first approach. …

These foundational elements will pave the way for stages two and three, planned for the next year, to go beyond the post into page templates and ultimately, full site customization.” – Source

Full-site customization? Do they mean a page-builder killer?

Are you convinced Gutenberg isn’t a threat in any way possible to Elementor?

It’s technically not. Not yet anyway. Not for three more versions according to WordPress. But somebody conveniently neglected to tell the herd this information. Humans are now confused about what a pagebuilder really is and does. Thanks to WordPress Gutenberg!

If we used a pagebuilder, it would be Elementor. We’ve allowed speed clients to keep it without complaint. We’ve recommended it to people who need pagebuilders – and speed. We don’t need a pagebuilder to build a website. But some people do.

Pagebuilders are only bad because human beings can’t control themselves. They’re seduced into adding too much. That’s bad for speed. This isn’t Elementor’s fault. It’s the result of human frailty. The whole pagebuilder phenomenon makes it easy for novices and dummies to create ridiculously slow (and also ridiculously goofy) websites.

Pagebuilders are a crutch. But we felt WordPress was a crutch, too. Shall we change our tune? Not until after the dust settles on Gutenberg. WordPress can nuke all pagebuilders in a blink. We don’t like that.

You can’t add Gutenberg features without hurting overall performance in some way. The churning in releases makes it impossible to know exactly how much that change is in milliseconds. We have to wait for the dust to settle.

From our recent speed testing: WordPress core with Gutenberg/v5.0.3 is more than 400 milliseconds slower to load than WordPress 4.9.8. That result is after two performance tweaks by the Automattic team (author of WordPress).