Minification is not an important optimization tactic for mobile speed.

There are 31 minification plugins in the WordPress directory. They vary from 3.8k to 6.6M Gzip-compressed file size. The plugins may be fresh and updated – or as stale as 8 years. What good are minification plugins? Why are they common recommendations for speed? Do they make a difference? Why do they often break your website?

NOTE: If code is offsite, like Facebook scripts, it won’t concatenate. It’s out of the control (reach) of the plugin. That code resides on a different protected server. No luck. Offsite third-party scripts – like WebFonts or GoogleAds – kill speed.

[dropcap]M[/dropcap]inification by itself is harmless. It’s removes white space and comments from HTML, CSS and JS code. There was a time when minification (white space removal) was significant. This was before the days of standard Gzip compression on servers. All modern browsers have Gzip activated for decoding or decompressing. Before Gzip, white space made a difference of 10 percent to 30 percent reduction in file size. In the  days of slow dialup modems, programmers hand removed white space and comments. That was worthwhile. But not any more.

When compressing a file with Gzip, file reduction is as much as 70 percent. Gzip codifies redundancy caused by code duplication. Additional white space removal, after Gzip compression changes, file size is less than 1 percent difference. Pretty minuscule benefit. So why even do it? Well, it doesn’t break anything.

No. Minification never breaks your site. But concatenation is a different matter. Minification plugins are a misnomer. The big speed gain with minification plugins is concatenating files. Concatenation is bundling files into groups such as the HTML – and makes them all one file. Then doing the same for all CSS files – making them one file. And also the same with all Javascript – into one file. You then retrieve each bundle in a single request. In theory, much faster. You’ve saved HTTP overhead.

Below are Pingdom.com test results with no concatenation. We see that there are 23 HTTP requests. Each “call” is in the waterfall of file requests. Page weight is lightweight: 132k. Speed is fast: 363 milliseconds. This also shows how the web assets load in parallel improving speed. 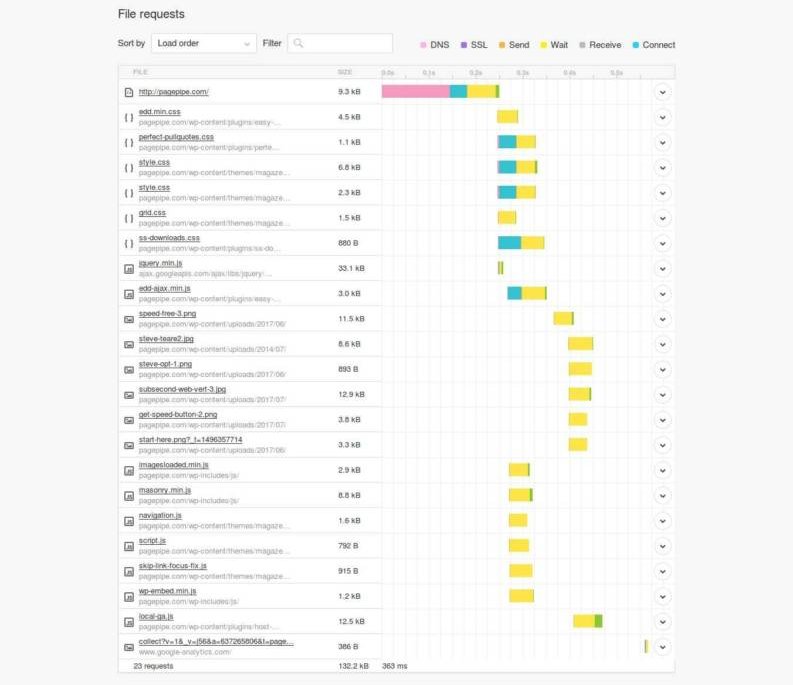 After adding concatenation, the number of requests is 11. Much less. Reduction in page weight is 116k (a 16k reduction) and speed is 137 milliseconds faster.

As speed freaks, we’d like to think so. But most desktop site visitors can’t perceive those kinds of speed difference. They see 1-second page changes as almost instantaneous. No waiting. But a 100 millisecond change is transparent.

For mobile speed, 100 milliseconds is a big gain. But not if it breaks your site.

Why not take advantage of the improvement? We’ll keep Autoptimize plugin installed. But if there is any sign of problems, forget it. It’s better to have a stable and usable site than a fast flaky one. Quality is important for credibility and usability.

Minification plugins are nice when they work. But more often than not, concatenation breaks your website in some odd way. Reducing the number of HTTP requests is nice. But parallel delivery makes a bigger difference in speed than minification and concatenation. You don’t control that. Browsers have changed and allow more parallel loading than ever before. The pipe is bigger.

Concatenation is a process that often doesn’t work “out of the box.” You need trial and error by switching on and off options. You may not eliminate all render-blocking resources without breaking the site. In fact, we gamble you’ll break your site before you’re done.

So what breaks most often:

These are all signs of concatenation messing things up. You may get the white screen of death. It’s happened to us. And we thought we were careful.

How much speed from minification plugins when combined with gzip compression?

Minification/concatenation combined with Gzip give some improved speed results. Gzip is a general, generic algorithm. It’s required protocol in our best-practices tricks. Minification is aware about content and does improvements general compression algorithms can’t. When it completely eliminates comments and whitespaces – that’s 100% data compression. There is no harm. Concatenation is always the real problem.

Minification is removing whitespace from site files. Often, minification can reduce file size by 20 to 50 percent. That doesn’t translate into 20 to 50 percent speed improvement. Sorry. http://www.minifycss.com/css-compressor/ Just paste the CSS contents into the CSS input area. Tweak the compression settings and options, and process it. Then, replace the processed contents. If you only get 5 – 10 percent improvements, be more aggressive with the compression settings. 99 percent of the time, the only thing removed from minified JavaScript files are the comments and whitespace.

Our Recommendation: Test minification plugins. If they break your site, forget about it. We do minification – if it doesn’t affect the theme functions. But often we invent workarounds. Any sign of trouble and we may try a couple more favorite minify plugins and then quit. Not worth the grief.

If there wasn’t some “measurable goodness,” we wouldn’t minify. Often, it’s only a psychological benefit. There’s therapeutic value for those afflicted with Speed OCD.

Feel guiltless if you drop minification.

What are our favorite Minification plugins?

We found Speed Booster Pack’s minification features succeed where other minification plugins caused conflicts or white screens. It’s not for everyone but worth noting here.

We recently used Asset Queue Manager plugin to de-enqueue the lazy-load-images function of the Speed Booster Pack plugin. That was a javascript file called sbp-lazy-load.min.js. It was being loaded globally and adding page weight. We wanted the nice other features of Speed Booster Pack plugin. But not the lazy load because it caused site drag. That function was loaded even if it wasn’t selected in the plugin control panel. Weird! Our preference was using Lazy Load by WP Rocket plugin which has no site drag at all – a weightless plugin.